What do President Bill Clinton, Jay Leno and rock legend Jim Morrison have in common? They’ve all owned Ford Mustangs. First introduced in 1964, the Ford Mustang was sexy, sporty and affordable and a smash hit, with Americans of all walks of life buying well over 1,000,000 Mustangs in the first three years. Today, over 50 years later, the Ford Mustang is an American icon. An automotive legend. Some say it’s the most famous car in the world. There’s even one in the Smithsonian Institution.

Now in its sixth generation, the 2018 Mustang continues that legacy, offering the most power, performance, safety and fuel economy in the sports car’s history. The 2018 Mustang, which competes with the Chevrolet Camaro and Dodge Challenger, is absolutely the best Mustang of all time. Let’s take a closer look at this all-American idol. 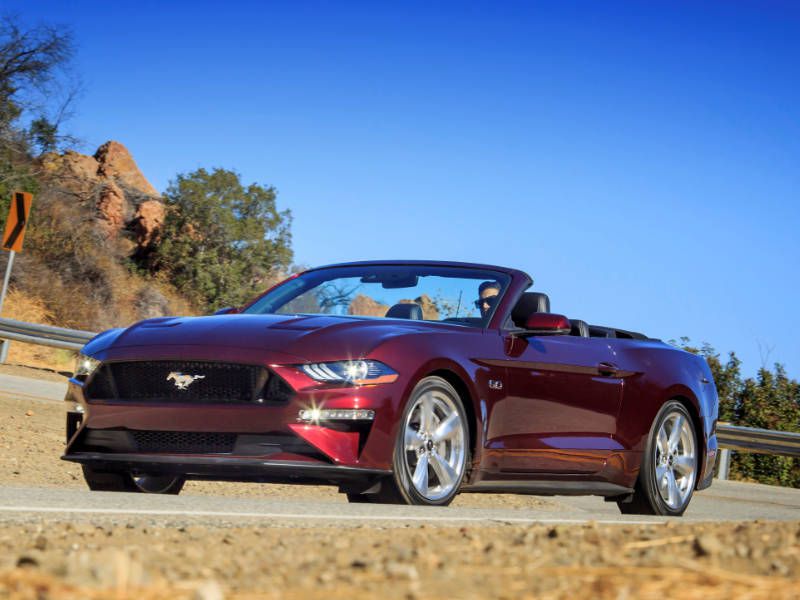 Available as a coupe or convertible, the 2018 Mustang comes in five trim levels: Ecoboost, Ecoboost Premium, GT, GT Premium and Shelby GT350. The Ecoboost Fastback starts at $26,485, including a $900 destination fee. The convertible, which comes with a power soft top, costs an additional $5,500 and is available only in the Ecoboost, Ecoboost Premium and GT Premium. All Ecoboost models feature a turbocharged 2.3-liter with 310 hp and 350 lb-ft of torque. Though it’s a four-cylinder, the Ecoboost is one of the most powerful Mustangs of all time, with more horsepower than the original Shelby GT350 of 1965 and the iconic 5.0-liter Mustangs of the 1980s.

If you need more muscle, V8-powered GT models start at $35,995. For 2018, the all-aluminum 5.0-liter engine now produces 460 hp and 420 lb-ft of torque. That’s more horsepower than you get in a Chevrolet Camaro SS. The standard transmission with either engine is a six-speed manual, but a new 10-speed automatic is available for $1,595. Our GT Premium coupe test vehicle wore a long list of options including the automatic transmission, performance package and the new MagneRide Damping System that smooths out the Mustang’s ride, for a total of $52,265.

Shelby GT350 is the Ultimate

With even more horsepower, performance and price, the ultimate 2018 Mustangs are the Shelby GT350 and GT350 R. Only available as coupes with a manual transmission, these models have a 5.2-liter V8 with a flat crank. The unique design gives these hot rods a race-car exhaust sound and the ability to rev to an incredible 8,250 rpm. Unlike the supercharged Chevy Camaro ZL1 and Dodge Challenger Hellcat, the Shelby’s V8 engine is naturally aspirated. Ford says it makes 526 horsepower and 429 lb-ft of torque. That’s quite a bit less than its rivals, but it makes these GT350s the second most powerful factory-built Mustangs. They’re also capable of 0-60 mph in 4.3 seconds.

Prices start at $58,045 for the GT350 and over $65,000 for the GT350 R. Other high-performance goodies on these two dream machines are massive Brembo brakes with six-piston front calipers, Recaro sport seats, launch control, and more aggressive bodywork with vented front fenders and a more sinister grille and front bumper. The GT350 R also adds carbon fiber bodywork and exotic carbon fiber wheels, which are stronger and lighter than aluminum rims.

If you think the Mustang is crude, uncomfortable and hard to handle, you’re living in the past. Ford has spent the last 54 years refining the car, and the 2018 model is comfortable and accommodating. Our test vehicle was fun to drive, with serious acceleration and handling, but it was also pleasant to be in. It felt solid. Its interior was quiet on the highway. And it rode as well as many sedans. We took a 300-mile road trip and emerged from the cockpit feeling fresh and ready to drive some more.

Braking performance is exceptional. Steering is a bit abrupt off center, but you acclimate to it quickly, and its weighting is adjustable with Normal, Comfort and Sport settings. But the Mustang’s sweetest asset is its big V8 engine. It’s smooth, barks to life through four big exhaust pipes revs to an unbelievable 7,500 rpm and provides enough thrust to peel your eyelids back. The new 10-speed automatic transmission is smooth and perfectly geared, but shifts could be even sharper, especially in Sport+ or Track mode. Use the paddle shifters and downshifts take a beat. Floor the throttle and the transmission will kick down from 10th gear, but we think it should happen more quickly.

Although few people buy a car like this for its fuel economy, the Mustang is surprisingly efficient considering its horsepower numbers. And its EPA estimates are strong for its class. The four-cylinder EcoBoost is rated at 21 mpg city and 31 mpg highway with the manual transmission, and 32 mpg on the highway with the automatic. These numbers match the performance of four-cylinder Camaro.

Completely redesigned in 2015, the Mustang’s exterior beautifully blends the new and old. Ford’s designers have created a shape that includes elements from many Mustangs of the past, but the car isn’t too retro. And for 2018, they restyled the Mustang’s front and rear ends. It’s now lower and leaner with a new hood, a more athletic grille and LED lights.

In Shadow Black with black 19-inch wheels, our Mustang GT Premium test vehicle looked menacing with a deliberate Mad Max vibe. From the rear, its wide stance and broad shoulders can truly be appreciated. The new LED taillamps and rear bumper are fetching as are the V8’s four big chrome exhaust pipes. At the risk of sounding prudish, our test car’s optional rear spoiler was unnecessary and only tarted up the Mustang’s clean silhouette, which includes a beautifully integrated ducktail its designers borrowed from the 1969 Mustang.

Like its exterior, the 2018 Mustang’s interior is completely fresh and modern, yet it includes elements from years past. The result is the best Mustang interior ever. Our test car’s interior was well-appointed and nicely constructed, and all the controls are well placed. Front-seat comfort is high and our test car’s Showstop Red leather upholstery was a brazen and seductive choice that created a striking contrast to the brilliant black exterior.

The Mustang’s new configurable 12.4-inch gauge cluster is cool, but the designs are a little busy. The two analog gauges in the dash center, one for oil pressure and the other for engine vacuum, are a nice retro touch. The SYNC 3 infotainment system is Ford’s best ever, and the 8-inch touchscreen is an intuitive interface. Unfortunately, onboard Wi-Fi isn’t available — it’s standard on all Camaros.

The 2018 Mustang seats four. There is no middle back seat, and rear legroom and headroom are a problem if you’re over 6 feet tall. At 13.5 cubic feet, the Mustang’s trunk is larger than you might expect. It’s also larger than the Camaro’s. Plus, a 50/50 split-folding rear seat for additional cargo volume is standard. The trunk opening is small, however, which may prevent loading larger items like boxes. The Mustang convertible has a little less room: 11.4 cubic feet.

Every Mustang gets a rearview camera and an SOS Post-Crash Alert System, which alerts first responders to the vehicle’s location if its airbags deploy. Available safety systems include parking sensors, active cruise control, forward-collision warning, a lane-keeping system, blind-spot monitoring with cross traffic alert and Pre-Collision Assist with Pedestrian Detection.

Ford’s Mustang has been in battle with the Chevy Camaro since the 1960s. Its other longtime crosstown rival is the Dodge Challenger. But the more expensive Mustang GT Premium and GT350 models also compete for buyers with more refined performance coupes from Europe, cars like the BMW 4 Series and M4 as well as the Audi S5 and Mercedes-Benz AMG C43.

The Camaro is a worthy competitor and matches the Mustang in almost every way. The Challenger is also appealing — though it’s not offered as a convertible, it’s the only one of the three Americans available with all-wheel drive. Plus, the top of the line Challenger Hellcat packs 707 hp and the Camaro ZL1 has 658 horsepower, both of which dwarf the GT350’s output.

Mustang is Ford’s second longest running nameplate — and in many ways it’s the automaker’s most important car. Ford has sold over 9 million Mustangs since 1964 and still assembles the muscle car in Flat Rock, Michigan, only 20 miles from its Dearborn headquarters.

For those in the market for a sexy performance coupe or convertible, the 2018 Ford Mustang is a very desirable overall choice, delivering style, features and technology in a fun-to-drive package. The Ecoboost model is enough for most buyers, but step up to V8-powered GT if you can. You’ll appreciate the additional performance and other desirable equipment.

The English translation of quadrifoglio is four-leaf…

The 2019 Honda Insight is an all-new hybrid sedan, but…

When it comes to American muscle cars,…